On behalf of the Sabri Ülker Center for Metabolic Research and the Department of Genetics and Complex Diseases at the Harvard T.H. Chan School of Public Health, I am delighted to announce the inaugural Sabri Ülker Symposium; “Metabolism and Life”, to be held May 5-6, 2016 in İstanbul, Turkey.

The symposium is focused on metabolism, which encompasses all of the reactions that generate and use energy and is the most fundamental process of life, starting from the synthesis of the very first macromolecule. At the cellular and organismal levels, metabolic flux and balance is a requisite to move, to replicate, to repair damage, and to sustain life, and indeed disruptions to this delicate balance are a major contributor to disease and aging. Thus, in some sense metabolism is life; it is the molecular explanation of how we interact with the internal and external environment and operate as living organisms. Proper metabolism insures robust function and health, and metabolic disturbances set the stage for chronic disease and the greatest threats to global public health. The Sabri Ülker Center for Metabolic Research is committed to investigating the molecular underpinnings of metabolism, its interactions with nutrients, and its dysregulation in chronic metabolic diseases such as diabetes and cardiovascular diseases as well as during aging, with the long-term goal of translating the findings into new therapeutic directions and strategies to prolong healthspan. The inaugural Sabri Ülker Symposium on Metabolism and Life is constructed on this framework and brings together a spectacular array of global experts exploring various aspects of metabolism in health and disease states and during the aging process.

The Sabri Ülker Symposium will be an unparalleled opportunity for attendees to engage with and learn from the globally recognized leading researchers in the field of metabolism from around the world. Sessions will feature presentations from renowned experts describing their innovative work to unravel the molecular details of metabolic pathways and translate these findings into real-world approaches to treat or prevent metabolic disease. The symposium will also be a great platform for young and emerging scientists to interact with established experts and for local and international scholars to build new networks. We are confident that this event will lead to new perspectives, stimulate new collaborations, and inspire future scholarly efforts. The meeting will be held in the spectacular Four Seasons Hotel Conference Center Istanbul at the Bosphorus, a converted 19th century Ottoman palace on the shores of the waters that divide Europe and Asia, and the event will feature local cultural treasures. Meeting attendees will have the opportunity to explore the very best that Istanbul has to offer, from architecture and history to shopping and arts and a very vibrant nightlife.

I am most grateful to Sabri Ülker Foundation and its staff for supporting the symposium, the speakers who have kindly accepted to participate, and personally welcome all of you to İstanbul for this scientific and cultural celebration.

About the Sabri Ülker Center

The Sabri Ülker Center for Nutrient, Genetic, and Metabolic Research was established at HSPH in 2014 to support the research of Prof. Gökhan Hotamisligil and his laboratory within the HSPH Department of Genetics and Complex Diseases.

Chronic and complex diseases, especially those of a metabolic nature such as diabetes and cardiovascular disease, are the single greatest threat to humanity in this century. The incidence of these diseases has been increasing at an alarming rate in Turkey and around the globe, having a devastating impact on human welfare and global heath systems. In a striking paradox, treatment options are regressing and viable prevention tools have not been forthcoming. Through long-term, unrestricted, and uninterrupted research to develop novel and effective treatments, realizing the translational potential of research, and understanding nutrients at a molecular and physiological level beyond the standards of traditional nutritional research, the Sabri Ülker Center seeks to address this unsustainable trend and leverage the revolutionary advances in life sciences towards innovative solutions for this great global health problem..

There have been few advances in the field of nutrient research since the early part of the twentieth century, when common foods such as salt were supplemented with the micronutrient iodine, cereal with iron, or milk with vitamin D. These actions, developed based on basic science discoveries related to fundamental processes in the human body, had a tremendous impact on public health, but they only scratched the surface of the potential for this field. The Sabri Ülker Center embodies contemporary research that goes deeper into unlocking the secrets of these molecular mysteries, leveraging nutritional and metabolic platforms to improve people’s health, while opening new avenues for discovery and new opportunities to translate science into bold, innovative solutions for the prevention and treatment of chronic and complex diseases. The potential outcomes carry the potential to offer the industry tremendous opportunities to improve public health by improving the composition of nutrients in food products that reach millions of people every day and also define a path for a new class of therapeutic entities beyond traditional domains.

The Ülker Center addresses a major challenge facing all humanity: how best to utilize the scientific revolution in life sciences to generate sustainable and effective solutions to improve health for everyone. In the new era of global public health, integrating state-of-the-art mechanistic and scientific approaches with nutritional implications is the next frontier of treatment and prevention for the worldwide metabolic disease epidemic. The knowledge emerging from this line of exploration has tremendous implications for science, global health, and the global industry.

The Sabri Ülker Food Research Foundation was established in 2009 as an independent, scientific, non-profit organization with the objective of enhancing nutrition science and knowledge, with a special focus on the Turkish population and regional neighbours.

The Foundation has made an enormous contribution to public health in Turkey, in collaboration with and acknowledged by the Turkish Government, and has ambitious plans to build on this in the future.

• Presenting the public with useful information relating to food, nutrition and health, derived from a variety of reliable sources, both nationally and internationally, • Encouraging optimum health by considering food and diet, nutrition and lifestyle, and • Supporting and encouraging new research, education and other initiatives in the field of food and nutrition. The Sabri Ülker Foundation has implemented a programme of nutrition education in schools in Turkey. So far this has reached over 1 million students, their teachers and families and the plan is to roll out the programme to all schools in Turkey (www.yemektedenge.org) Every year hosts an annual Nutrition Summit which, this year, attracted over 300 stakeholders (as well as approximately 10,000 online participants) including academic and government scientists, as well as industry, media and consumer group representatives. This has provided a unique forum for constructive dialogue on major public health issues. The Sabri Ülker Science Award provides encouragement to nutrition scientists working on projects relevant to public health in Turkey and beyond. Click here to see the Sabri Ülker Foundation 2015 Annual Report 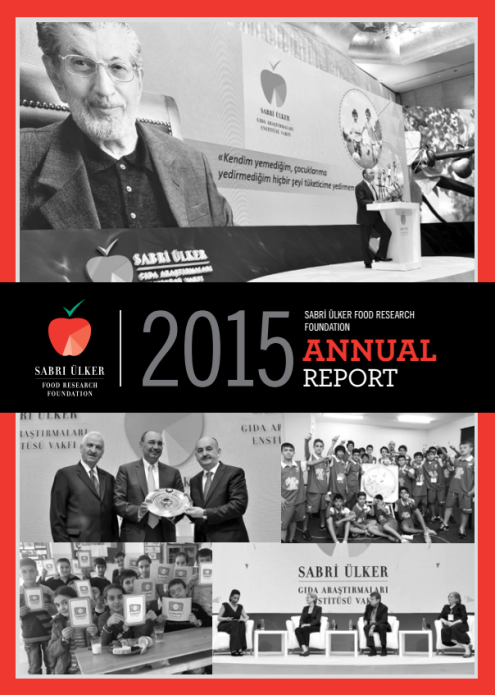